Back in May 2014 after the results of the elections to the European Parliament, I speculated that I didn't believe  that the whole of the 17% of people who voted for UKIP were actually the xenophobic bigots my fellow left-liberal friends were painting them as; I speculated that most of them were probably simply ignorant (in the unaware sense) of what the EU is, and ignorant of the true nature of immigration into the UK, and simply wanting to give the Tories a bit of a kicking. This was a year before the General Election, when all the polls were expecting a year later to see a win for Labour (a tight one if not a comfortable one), and there was no serious expectation at the time that a referendum on the UK's membership of the European Union would be happening any time soon. My response was rather than complaining about so many people voting UKIP, wouldn't it be nice instead if we could spend the forthcoming year  actually explaining properly what the EU is and isn't, how it works, emphasising the real benefits of its existence and our membership of it, and indeed acknowledging the downsides as well.

Two years on and approaching the end of a referendum campaign about whether or not to stay in the EU, rather than there having been any real attempts to explain the EU properly, rather than either side having any interest in engaging in an actual debate on the matter (the national broadcasters hosted TV sort-of debates, but for the most part the representatives of the campaigns refused to debate together, rather mostly getting whole programmes to themselves in Q&A, I created a website in order to facilitate online debate and discussion which went mostly ignored by people), instead we've seen mostly shouting into echo chambers of self-selecting groups of people who mostly agree with what's being shouted anyway, we've seen both sides mostly paint supporters of the other side as being stupid idiots for holding the opinions they do, we've seen campaigning based on lists of famous people who support both sides with the captions 'who do you trust more - these people or those people?', we've seen a Leave campaigner saying the UK's curry house scene is under threat because of the difficulty of bringing enough trained chefs from Bangladesh into the country and we've seen David Cameron, the leading Remain campaigner say that if we do leave one possible consequence could be World War Three its very self.

We've seen perhaps the most important decision the country has had the opportunity to make in two generations, for the next two generations, reduced to Facebook and Twitter memes of pictures of rum folk with dodgy hair pitted against pictures of nice folk posing for the camera with suitable gravitas. 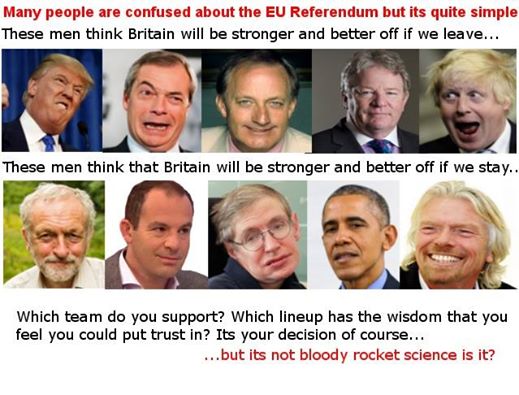 Both sides have produced their various tame experts to express their points of view on the consequences of either result to jobs and the economy; the problem is, all these points of view can be nothing but speculation - economists are very good at explaining current circumstances and analysing past circumstances, but when it comes to forecasting the future, they're no more accurate at it than weather forecasters. Since nobody knows what kind of deals we'd be able to negotiate on a Leave, and nobody knows whether there are any further gotchas lurking around the corner which could bring the Eurozone to its knees, nobody can know with any useful degree of certainty what the comparative economic risks and benefits might be of either result. Both sides have produced business leaders to support them, but, being frank, I care little for the fact that remaining is good for Richard Branson's business or leaving is good for James Dyson's business - the fact of one result or the other being good for one or the other's business has no bearing on whether one result or the other is good for everybody or not.

There are some facts to be had - there's the fact that no matter what Remain say, the EU is fundamentally an undemocratic organisation. It's undemocratic by design, partly because that's the whole point of it - a realisation that some areas of shared human endeavour are not best left to the whims of whoever can be bothered to turn up to vote that day, because you'll never see turkeys voting for Christmas, and it's undemocratic by nature - there is no pan-European demos for a democracy to function in because the sad fact is, democracy doesn't scale well anyway - it just about works at a local council level (or it would do if people bothered to participate), and it just about works at a national level, but barely does it work at a continental level. And if you're main objection to the EU is the level of control which is in the hands of the unelected bureaucrats, how much control do you think the unelected bureaucrats of your local council or the nation have compared with the elected representatives?

And there's the fact that no matter what Leave say, the EU is not interfering with every minute aspect of your life or of UK legislation; sure, there are EU regulations which affect all of us, but those are regulations - on food quality, on workplace safety, on product safety, on human rights - which any decent human being agrees are good regulations to have, and the existence of those regulations across the single market are what ensures product and service providers get to compete on a level playing field without rogue traders claiming to be selling something they're not. But there's no EU law which forced the UK to privatise the Post Office, contrary to what Leave campaigners claimed several years ago. And the aspect of EU law which comes to us in the form of Directives - they're basically points of principle which national legislatures are left to implement as they see fit anyway. And guess what - most EU Directives which have been implemented into UK law, the UK government has tended to what's known as Gold Plate (add a whole load of other stuff whilst they're at it) on the implementation, so for example a fictitious example of an EU Directive saying bananas must be sold no longer than 10cm long, UKGov historically would always implement by saying bananas should be sold no longer than 8cm long, and show have between 27 and 42 brown spots on the skin at the point of sale.

And oddly, when both sides have left open goals in their position, the other side has done little to exploit them. The fact is, the deal David Cameron came back with after his reform negotiations was so inconsequential few people can even remember it having occurred, never mind what was in it. If the Leave team had any degree of competence, they'd have been all over this the whole campaign as the perfect demonstrator of just how closed to reform the EU actually is - if that was the best reform DC could get when he was in the room saying 'look, lads, my arse is on the line here - if you don't give me something good to go back to the country with, the country's going to quit', then it shows just how little influence we actually have when the stakes for the Union as a whole aren't so high. And when the Leave camp have kept banging on about immigration and how terrible it is and how we need to Take Back Control (repeating those three words ad nauseumlike they were a topic on Just A Minute), the Remain team have done little to counter it by explaining how the level of net immigration is not remotely what Leave claim it to be, that immigrants are not actually driving down wages (because we have minimum wage legislation which most Leave campaigners would abolish at a stroke), and that by and large immigrants are net contributors both to the economy itself and to the organisations they're working for. Instead, the official Remain campaign has basically agreed with Leave about needing to do something about All These Bad Foreigners, and bizarrely their counter argument is to say that the so-called Australian Style Points System which most Leavers refer to will let in more immigrants than we currently get.

Apart from the German-born MP Gisela Stuart (who with no sense of irony is the chair of the official Leave campaign), Labour has broadly stayed out of the ding donging, point scoring, and petty mud slinging that has characterised most of the campaign; for once under their current leadership, Labour MPs have realised that since most of the campaign has been characterised by Tories flinging used cat litter at each other, their own interests are better served by watching them get on with it, taking a temporary break from the business as usual practice of flinging mud at Jeremy Corbyn. The Tories have almost certainly been seriously damaged by the referendum splits, but don't get complacent, Labour folks, the Labour Party is just as split and needs to make a bit more of an effort to get it together by 2020 if it wants to win.

And now as the stakes start to get higher, as the polling is showing the result is less and less predictable, the campaigning has been getting dirtier - as somebody has pointed out that the referendum isn't legally binding anyway, claiming that since there's a parliamentary majority of MPs for Remain, then they'll block a Leave result regardless. This has been bandied around as if some kind of conspiracy in the legislation which created the referendum in the first place, missing the point of how laws are actually made in this country - legislation happens when the government (or very occasionally an individual MP) brings forth proposals to parliament which is then voted on, amended, and voted on again. That's how the British constitution works - laws are made by MPs and Lords, not by popular vote in a referendum. But that said, it would be political suicide for any government to ignore the clear result of a referendum, just as it would be political suicide for most MPs, unless there's a local context otherwise, to vote against legislation resulting from a referendum. The nightmare scenario could be if the result is close - a majority less that 52%/48% - especially if turnout is lower than 60%. If this happens the recriminations from both sides will be orders of magnitude greater than they're currently being.

But whichever side wins, the one thing I can say with 99% certainty is the main blame for the losing side will not because the odds were stacked against them or the other side cheated, it'll be because they failed to make a convincing case; their campaign was poor and shallow.

You Won't Believe What Happens Next.