www.birmingham.gov.uk Alpha project - Images of Birmingham on the home page

Back in late September 2012, as part of my work at Birmingham City Council, I instigated and led on a programme of incremental improvements to the council's website, blogging about the ideas and progress along the way, taking inspiration from Shropshire Council's Project WIP and the Government Digital Service work on www.gov.uk. The site on which I blogged has been taken down now, but I thought it worth reposting the more broad-reaching content from it here.

One of the issues which has caused a fair amount of discussion amongst colleagues internally is the matter of images of Birmingham on the home page.

There’s a strong view that as well as being a gateway to the services the website and the council as a whole offers, the home page should be used to market Birmingham the city, particularly by means of having pictures of Birmingham on the home page.

We’re not automatically opposed to this idea on principle – but we are indeed unsure about it as a direction to go in, partly because we want to ensure the home page is as focussed and uncluttered as possible, and partly because we don’t think people come to the council website with a particular interest in looking at pictures of the city; residents will already know what the city looks like, and visitors and potential visitors will always find a richer source of imagery of the city from sites such as Flickr.

There’s also the more pragmatic question of what images to use to promote the city? Selfridges has been a favourite iconic image since it opened here in 2003, but 10 years on it’s perhaps time to think of other iconic images. The Council House is another oft-used image by ourselves – but fine building as it is, is the organisational centre of the civic administration the best image to use to promote the city as a whole? We like to promote our canals in Birmingham, but actually there aren’t many canal vantage points which are both highly photogenic and at the same time clearly uniquely Birmingham rather than canals anywhere.

We’re all getting quite excited about the opening of the new Library of Birmingham this coming September, so we’ve chosen to use a highly de-saturated image of the building’s cladding as a background image windowed across the home page’s six segmentation boxes.

Looking at other councils’ websites, I picked a random sample of six different home pages and was surprised to see actually none of them featured images of their localities: 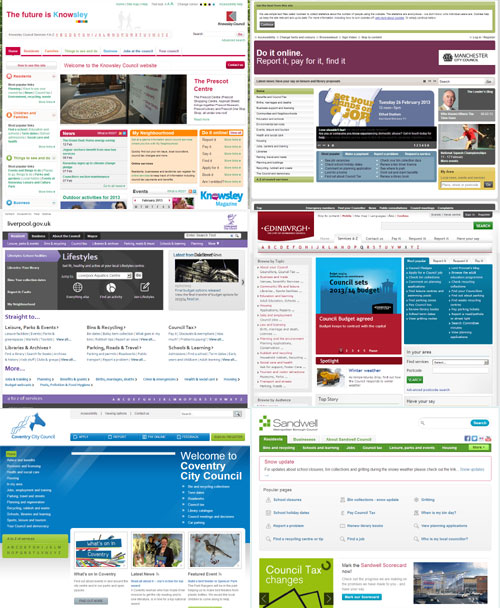