Local election 2016 - who to vote for in Bournville ward?

Although Cotteridge and Stirchley (or as I call it, Stirchleyridge) is what the estate agents call an Up and Coming Area, we're still not hip enough to have our own local election hustings - we still have to leave that prestige to Moseley. Unlike some parts of the city, we do at least get campaign literature - from some of the candidates, at any rate.

I've read what they're promising, so you don't have to.

Mary is not a sitting councillor, but she's representing the sitting administration, the Labour Party, for a ward which has one of its three councillors as Labour; depending on what issue it is which is most offending voters by this Thursday, she's in with a reasonable chance of being returned elected. What's she pledging to do, then?

She says she'll improve the rubbish and recycling collections. For those who live in Birmingham, the bins is the issue, next to the Central Library Library of Birmingham's opening hours. Apparently our waste collection service is quite rubbish, with the depot which serves us in Stirchleyridge being exceptionally rubbish - though I have to admit I've not actually experienced this myself, as our bins are always collected on the day they're supposed to be, and the streets around the area look reasonably cleaned to me. I didn't support the introduction of wheeliebins myself, but they don't offend me so greatly I could be bothered opposing them. Where there is a problem with rubbish and recycling collections she's in a bit of a spot given her party have been running the council since 2012.

Apparently throughout the ward people are telling her about concerns re road safety and traffic congestion - so she'll work with communities and police to make our streets safer. The main congestion i see out and about is at the Cotteridge double roundabout, to a significant extent caused by people who don't know how box junctions work; I'm no transport planner, but I'd have thought the best way to solve that would be replacing the double roundabout with a single big roundabout - maybe even with traffic lights. I don't know why her colleague the sitting Labour councillor hasn't already done something to solve this.

And of course, there's the regeneration of Cotteridge and Stirchley; she says she'll work to build on the arrival of Tesco (vigourously opposed by many living here, who seem to think the Co-Op should have the monopoly supermarket provision), so our high streets thrive like they used to. So that's alright then. Sorted.

The local Green Party think, I think, Ian has a real chance of being returned here. So what's he promising?

I think Ian might have missed a memo here - he seems to have confused standing as a ward councillor with standing as the city mayor. Whilst it's obviously important to know what a party's platform for the city might be, what I really want to know is what the particular candidate's platform for my local area is in a local election. Perhaps these are indeed his pledges for Cotteridge, Stirchley, and Bournville?

I'm not sure where he might build a real cycle network separate from cars with priority at junctions in the ward; along Pershore Road pretty much all of the properties face directly on to six feet of pavement which is then on to the two-by-two lane road (with the pavement-side lane being mostly used as parking). Along the other (one-by-one) roads in the ward where the building isn't straight on to the pavement it's broken up with somebody's front garden - so Ian is either pledging to build cycleways through peoples' front gardens, or he's pledging to knock buildings down, or he's pledging to turn a two-by-two road into an even narrower one-by-one road and remove all those parked cars to somewhere else. Though presumably not the front gardens. There's no denying there is a cycling safety problem along Pershore Road in Stirchley, but I'm not sure I've seen any sensible solutions to it.

Making use of legal means to bring empty properties back in to use as accomodation seems reasonable enough - I'm sure there must be some empty properties in the ward which could provide some homes to people, as does following Scotland in banning waste food being sent to landfill. Although I'm sure the easiest way of doing that in Birmingham without introducing a bye-law would be to simply introduce food waste collections, which the Labour administration are already contemplating doing by allowing people to put food waste into their garden waste bins anyway. Though I don't know what either party are suggesting doing with those chicken remains.

I imagine the number of jobs which it is possible to create in the ward in windmill and solar panel factories would be quite minimal, but hey, every job helps.

It's a creditable platform to create a local street cleaning team - but as a previous councillor, I do have to ask him why him and his other two Conservative colleagues havn't done so already? The street cleaning team was cut as part of a city-wide funding cut, as Birmingham itself is having to tackle major budget reductions in the money it receives from central government. What Nigel doesn't say is what he'd cut elsewhere to pay for it.

It's a nice idea that he'd ensure local people are first to be offered the new jobs at the new Tesco - but unfortunately the law doesn't really permit that. The best he could do would be to ensure that Tesco puts its first tranche of recruitment effort in to places that only local people will see, with maybe also advertising its jobs in the Selly Oak Jobcentre (do they still advertise jobs in Jobcentres?) - which of course would also open the first jobs up to the unemployed of Selly Oak. And I'm sure Tesco themselves would rather they employ the best people they can get rather than just the most local people they're permitted to get.

Reducing traffic chaos in Cotteridge is another campaign pledge he shares with Mary - with the response being if it's something he can do, why hasn't he done it already? Especially since his ward colleague Timothy Huxtable already has a reputation and history of influence in matters of transport.

It's true that hanging baskets make a shopping centre look nice - but frankly, the visual problems of Pershore Road through Stirchley go a bit further than can be solved by having a few flowers hanging from lampposts. I've no idea how much these things cost when the council provides them, but again he doesn't say how he'd pay for them; I'd have thought a better bet would be walking from shop to shop asking the local businesses to club together to do something to make the place look nicer than cutting council funding from something else to do it.

I didn't know there were two micro-parks in the area; I've been in the one behind the Co-Op in Stirchley - it's nice enough, if a little plain. To my mind, if he's got money to splash around (from whatever unspecified thing it is he'll cut from elsewhere), spending that on making the existing two of them to be nicer would be better than building a third one. I imagine even a micro-park doesn't come cheap.

Children's play areas in the main parks has become a hot issue elsewhere in the city, with one of the candidates starting a petition to not have one removed which already isn't slated for removal anyway. I don't know whether any of the play areas in this ward's parks have been slated for removal; if Nigel is going to prevent it then it would have been nice if his campaign literature had said what he'd cut elsewhere in order keep them. 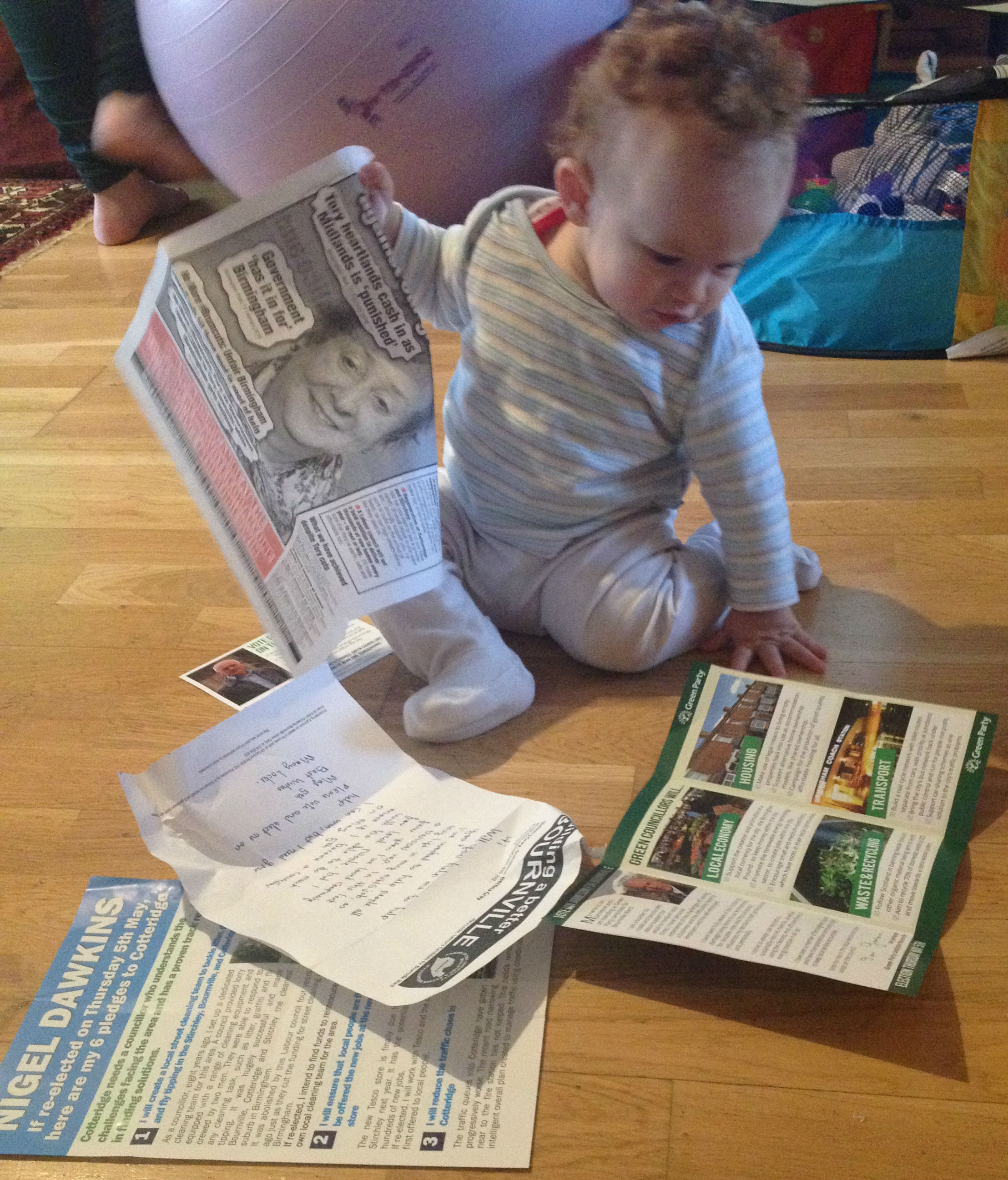 As well as the three candidates above, there's a Liberal Democrat candidate and a UKIP candidate standing but they evidently don't rate their chances much, because I don't remember seeing any of their election material come through the letterbox; as they always say on the news, a full list of candidates can be found on the Birmingham City Council website.

So to sum up, the three candidates are all pledging to spend money the council doesn't have to fix problems they or their colleagues haven't fixed yet. That makes the decision of who to vote for on Thursday much easier to make, I'm sure.